I woke up about 7:00 feeling fully rested and refreshed! ¡Grácias a Dios! The prayers of the saints were answered.

The morning was warm, and a cool shower felt refreshing. After breakfast, Cuco informed me that, though the church meeting began at 11:00, he was responsible for bringing the grape juice for communion, so he was going a little early for preparations. Marshall and I were ready to go, so we accompanied him to Ley, the grocery store just the next block over. For as much of a landmark as Ley became to us for our neighborhood, somehow I never thought to take a picture of it!

All three of us were wearing backpacks, and as we walked into the store, I thought it odd that they would let us take bags into the store. But Cuco immediately approached a desk just inside the entrance where we could check our bags. A very interesting concept!

Here's an interesting tidbit about Mexico. When we go into a grocery store in the U.S., we expect to see a lot of teenagers working at the check-outs and collecting shopping carts. In Mexico, they employed children, about 12 years old, to collect the carts and bag groceries! This is not so odd to consider, since schools have day sessions and night sessions. Josue happened to go to school in the morning, around 7:15. Other children might go to school in the afternoon to evening. So when they're not in school, they have time to work during the day. The other reason for children working is they don't have such restrictive child labor laws as the U.S.

Cuco made his way to the juice section of the store and selected a bottle of jugo de uvas. Right by the checkout lane was a display of water bottles. Marshall recommended we both get one, since one never knows when there might not be purified water nearby. Cuco graciously offered to pay for them, for which I was extremely grateful, since I hadn't had a chance to get money out of an ATM yet. The next day or two I exchanged $50 with Celina, who had accidentally gotten way too much money from the ATM!

From Ley we walked across the street, through an empty corner lot, and met up with Ken, Willie, and Ryan who were waiting across the street from the church meeting place. It was really nice that the building was so close!

Only a couple of minutes passed before Craig and Brenda drove up. They unlocked the door and we helped carry in the soda bottles and food they had in the back of their Explorer. 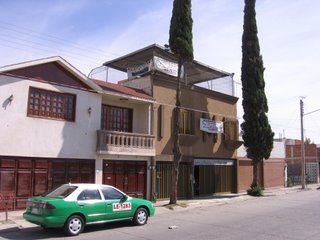 The church building for the Leon East assembly was a house converted into a private preschool/kindergarten, owned by one of the members of the church. It's trademark is the colorful stripes on the front gate/wall/garage door at the street. It wasn't until much later that I discovered this Sunday was the first meeting in that facility! Before then they met in the Landrums' home.

The front meeting room technically was a garage. At this point I should explain about Mexican houses in the city. They are, as you can see in the above picture, right on the street, and have no yard. Almost all of them have a parking spot or garage on the property. Such parking areas are not asphalt but tile, and the house, which surrounds it on at least two sides, usually has a main door that opens directy to the parking area. If the area is a garage, the house has two stories and the floor plan of the second story extends over the garage. The garages and parking spaces are enclosed by a metal gate/door that hinges on the side. So in the picture above, the wide, brown doors on the house on the left are actually garage doors. 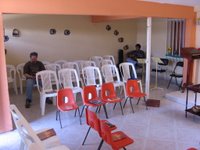 It was in the front room, or garage, of the "kinder" where the church service was held. We Americans helped set up the plastic chairs (much more comfortable than the metal and wood chairs we have at our home church in Newtown, CT!) and distribute the song books.

After Cuco set up the communion cups and crackers, he took a spot in the corner as one of the guitarists. At 11:00, when the service was supposed to begin, only a third of the people were there, and everyone knew there were more coming. The Mexicans are usually laid back, and not in the big hurry that we Estadounidenses (United States-ians) are, so this was typical.

I distinctly remember a couple of individuals who arrived. Alberto went around the whole room greeting everyone with hanshakes, even all us Estadounidenses. Josue (not the one from my host family) made a point of giving all of us hugs. I later found out Alberto is 31 years old, and I know Josue was married in his twenties. Another young man, Fernando, also gave us hugs then took a seat with the guitarists.

Now there were four guitarists: Fernando, Cuco, Josue (Cuco's son), and Luke Delaine, the son of Bob Delaine, a missionary on the other side of Leon. His family was attending the East side this morning probably because it was the first meeting in the new location.

During the worship hour, many songs were requested in the beginning as a few people still were trickling in. All the songs were accompanied by the four guitars. It was really neat to be able to sing songs to the Lord in another language and know He understood! Some of the songs were transcriptions of some contemporary christian songs like "God of Wonders" (Maravillas) and "Lord I Lift Your Name on High" (Señor, Tu Nombre Exaltaré). I don't think any of the songs we sang were quite as rich with meaning as Isaac Watts or John Darby, but they were sung from the heart, and to the Lord.

Knowing some Spanish enabled me to understand the gist of what the prayers were about, if not completely understand them. I can't imagine how it must have been for the people in the Emmaus group who didn't know Spanish! Despite the language barrier, which differed in intensity from person to person, the love of Christ was definitely present! The believers all made us feel so at home! 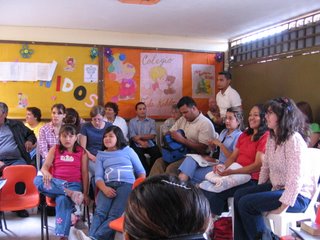 After communion, there were times for prayers of intercession and supplication, a "free time" in which brothers could share an encouragement from the Word or something, and a memory verse review led by Fernando. 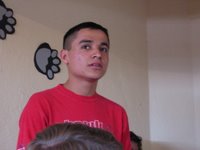 Caleb, from the Emmaus group, brought a message from the Bible that morning, speaking in English, while Craig translated into Spanish. It was interesting to hear the subtle differences in how the Spanish was worded to convey the English meaning.
at 11:15 PM 2 comments:

Email ThisBlogThis!Share to TwitterShare to FacebookShare to Pinterest
Labels: Mexico

I was still feeling very tired from the previous night, and all I had the energy for was sitting in a chair in the warm sunlight...still with my jacket on. I had brought a dozen loops of string along to play some string games (like cat's cradle) with the children, but did not have the energy to participate in such activities.

Ken was working with Celina, Caleb, Scott, Ryan, and Willie entertaining the children. They played Bible charades by acting out stories from the Bible, as well as goofy games.

Here three of the boys are acting out the story of Joseph (José). Fernando is playing Joseph, and he is receiving the coat of many colors from his father. Alejandro, his brother, played Joseph's brothers and did a good impression of mutilating the coat! 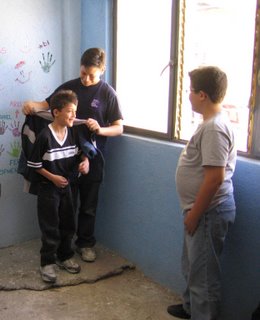 These little girls were delighted to have Ken take their picture! 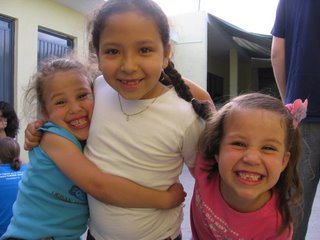 I was very comforted by the concern of the believers for my health that day. Word quickly spread among them about my condition and several checked up on me during the day. It was astounding just how much I felt at home with them! They were like family! And such we are, for we are brothers and sisters in Christ. The family of God is a wonder!

All day long I was drinking water and Coke, staying hydrated while not well (don't worry, there was plenty of purified, bottled water!)

Around noontime, I was feeling a little better and joined a conversation with Scott, Ryan, and a Mexican, Oscar. Oscar was about 30 years old, and was telling us about how God had changed his life (even after trusting in Christ for salvation), making him more outgoing and filled with love for the brethren. It was really neat to meet him. He was one of the ones frequently asking after my health, and when I admitted I seemed to have a headache, he gave me someaspirinn. 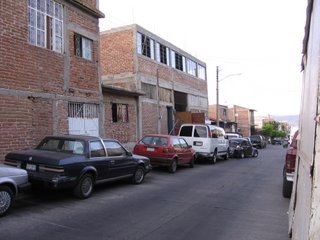 Midday, a large meal was prepared (it was lunch, but lunch in Mexico is usually eaten around 3:00 p.m.) but I can't tell you what there was to eat. The smell of food was still unappetizing to me. However, I did have a little cup of fresas con crema,strawberriess in cream. That was tasty. By that time, Brenda Landrum and Oscar had told me if I felt I needed to go home, they would be happy to drive me. I had thanked them both, and thought I would wait a little while. I started to suspect I had a fever, for my face felt warm to my touch. At some point, I told Oscar about my suspicion, and after feeling my face, he confirmed I was warm.

Oh well! I wished to stay at the gathering, but I knew I really needed rest if I was sick. So I told Brenda about it, and she steered me to Bob and Kim Delain, another missionary couple in León. They were just about to leave and would be passing by my house on the way home, so they gave me a ride in their van.

When I arrived back at the Cuco and Nancy's apartment, I went straight to bed and slept from about 4:30 to 11:30 or so when I was awakened by the rest of the American team and some of their hosts. I tell you, it's amazing how many people you can stuff into a little apartment! And they do the same with cars, taxis, and buses in Mexico too!

Here's a picture of their apartment complex, taken the morning of our departure. 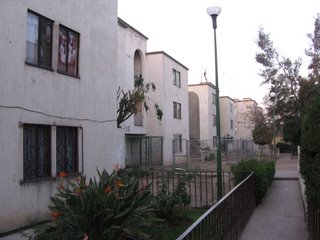 Administrative Be vs. Do Books BUCKIT Week Devotionals Do Hard Things Encouragement Experiences Meditations Mexico Movies My Utmost for His Highest Photos Quotes Reasons Not to Sin Songs

Get Updates by E-mail